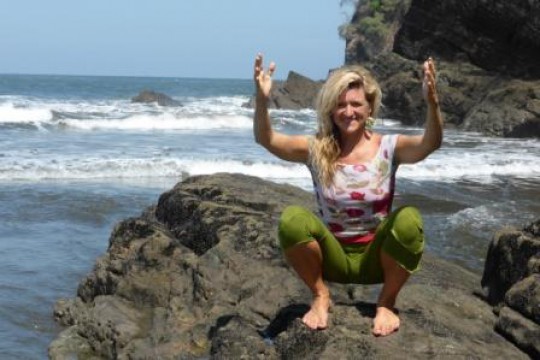 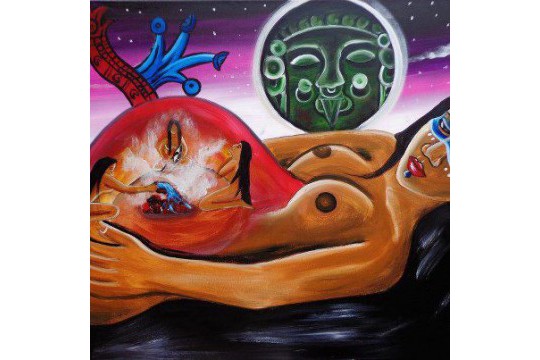 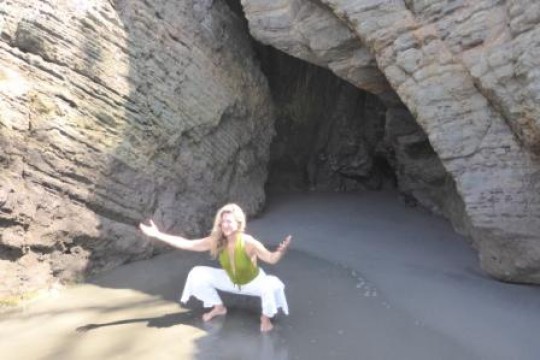 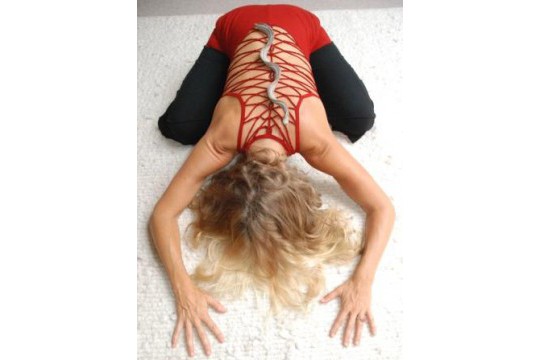 
I started yoga when I was 18 years after several years of anorexia nerviosa, wishing to connect and restore my body again. Few people were doing yoga at that time and it hardly anyone understood why I did yoga. I don t even remember if I knew what I was doing, I just felt that it opened my body and mind and it helped me in a certain way to heal. It was the first time of so many times that I walked the path of medicine yoga, feeling how yoga could heal me in many senses of the word.

I lived, worked and travelled long in Latin America and was initiated in the holistic visions, rituals and ceremonies of indigenous cultures through intense work and living experiences. My Chilean lifestory after the dictature, living at the feet of the Pacific in a primitive paradise, was like being swong between living and surviving, searching for new, own authentic values. Leander and Sara Yula, my two wonderfull adolescents, carry Chilean blood and in their genes they let West and South melt together. Slowly it became clear in my life that it is my life journey to break down barriers on every level, to bring people, cultures and especially women together, let them encounter and re-member who they really are inside… I love the Goddess tradition and bringing people in a re-connection with their primal force…

In Chile I followed a first Teacher Training in Hatha Yoga, in a very school that doesn t even exist anymore but it gave me a good basic knowledge and insight in the principles of yoga. Yoga has always been on my life path, not always in an active way but I always returned to practizing after I will because my whole system was in need of breathing, moving, connecting through the asanas. I even did yoga when I was pregnant with some basic asanas that I learned myself and that are still such important postures in pregnancy yoga.

Once back in Belgium, I followed a bachelor in intercultural communication and management, where I coordinated for years the module Latin America and I still give trainings there in religion and syncretism in Latin America and the visions of shamans worldwide on illness and healing. Throughout the years I specialized in these themes. Through diverse trainings but especially through intense experiences (f.e with the Mapuches in Chile), I grew to shamanistic and creative coach. I dedicated myself a while to Kundalini yoga and followed part of a teacher trainings in kundalini yoga (never finished it because it felt to sectaric).

I am fascinated by coaching groups and people, it passionates me, especially in contextual coaching, open people’s mind and consciousness, to create a dynamic that links people and make them communicate, who different they are through their culture, origine, education, mindset…As a guide tourist I guide groups in Latin America, this magical wonderful continent, and for years I have been giving courses to guides and tourist guides on culture and communication, groupdynamics, animism, shamanism, sustainable turism…

I give healings, organize and coach ceremonies and keep on walking and immerging myself in the energetic path. I have a master degree in Reiki, followed diverse workshops on lightwork and healing and was initiated in the beautiful and profound Munay Ki and Ñusta Karpay. My primordial source of healing is Pachamama, Mother Earth, and female wisdol and energy of indigenous cultures in Latin America. Through initiations, ceremonies & rituals, I walk the path of Pampamesayoq towards a Paqa, a medicine women. Through the Obod traject I am also deepening in rituals and the path of the Druids, sinking and exploring more my Celtic and Germanic Roots…

Goddess cultures from over the whole world, fascinate me. Lately I was on my Goddess Path in Malta and Gozo. Gozo is the female island that carries the memories of a rich neolithic culture. I spend hours and hours sitting there, listening, meditating, observing the energy of Ggantija, Santa Verna and the Xaghra Stone Circle. I could feel through the connection with the Earth, how I came home. The megalithical stones still recall an enormous rich past where the Great Mother was honoured in a harmonic and loving society between men and women, in a harmonious connection with the earth and all elements. The Goddess send me a clear message: bring back our memory… All the work that I have been doing with women and my own Goddess life path, in connection with a deep longing to realise something bigger in the world for and by women, leads me to the creation and soul-giving of the Belgian Ostara womenfestival and already the seed for Feria Femenina is planted in the earth. It s the beginning of healingwork of female energy on a more universal level. Grateful and strenght with this message from the Great Mother, Bring back our Memory.. I accept and can go on walking in thrust…

Though it took me many years to realice the importance of women healing in my life. This mission didn’t come from one to another day!. In 2009 I decided to start a Teacher Training in Ashtanga yoga in Holland (Eindhoven), ‘thinking’ that this would be absolutely my piece of cake. On the contrary, I got confronted with a very male group, a very masculine way of doing yoga, very structured, and above I really got strongly confronted with the limits of my body. It ended with a knee operation and a hernia in my lower back. I did the course untill almost the end but never did my exam nor do I feel that Ashtanga yoga resonates with my inner being. As a lion, I love ot create, to play, to feel in the moment what is needed and to generate new ideas, projects, flows, sequences…. But I did learn a lot from the Ashtanga, especially in the importance of core, bandhas and ujjayi breathing.

Yoga and dance has been part of my life since so many years and I prefer an intuitive, contextual and creative way in guiding and coaching people, in giving classes to adults and in workshops on dance and movement. I started giving classes 10 years ago and gradually I developed my own yoga style, Sense & Flow. Trusting on the inner wisdom of our body, learning to feel (sense) what a posture or movement does to us in every level, going deep inside and experience what a asana really is about. A dynamic way of doing yoga, but I compare it with moddeling out of clay…. modelling from the inside, creating a form from the inside towards the outside. And awakening of the female warrior energy through consciously controlling the energy of every movement, gesture, breathing,…!

In 2012 I started a Dru Yoga Teacher Training in Holland (Arnhem). Dru Yoga is a wonderfull soft dynamic way of yoga focussing on the heart energy, working with the muscles but always soft in the joints, especially of the knees and the elbows. Such a contrast with ashtanga! They have beautiful sequences, they see every asana as a sequence on itself and focus a lot on meditation and positive, heartopening energy. As my postures deepened and softened, I felt more flexibility and opening of the mind and my body, I m very grateful to this profound teacher training that I finished in 2015.

Astrological I am a dubble Lion, there is a lot of fire energy in my whole being. I love fire and it is an important part of my daily life, as a fire women and keeper of the fire. I honour the female power of Grandmother fire. To meet Yves in a ceremony with swetlodge, was connecting with a soul partner, to the fire and to my soul… Organizing and leading together swetlodges, swetlodge ceremonies and rituals, is each time a challenge to coach others in a magical proces between male and female energy, between fire and stones, the sun and the moon, between pachamama, the spirits and the elements of nature, the four wind directions, guides and ancestors. Each time different, healing, transforming, creative, joining hearts, cultures, souls…

I can truly say that Yoga is my beloved medicine. Every time I roll out my mat, is a sacred moment that, even if it costs me to start, once I catch up on ujjayi and start moving, stretching, breathing, I feel the importance of this medicine for my entire body, mind and soul. It helps me to understand, to trust, to have faith in a life that hasn’t been so easy to walk. Years ago, when I finished a former relation and again I felt back on my own with two children (I mostly grew them up by myself since their father is Chilean and hasn’t really taken part of their growing up), I needed two years to reflect and restore old patterns, masculine values that I ve been trapped in since I was born… I rolled out my mat every day and practized yoga 2 hours. Again, it was my only medicine…. So many times in my life yoga saved me, and I can truly say that if yoga would not have been part of my life in that period, I would not have had the power to survive. It grounds me, supports me and brings me each time back into my body.

Going towards 50 years of life, in 2 weeks I am entering a new life cycle, 49 years (7*7). I trust myself to surrender to less head and more body, softening my energy, accepting what there is and what there isn’t. Knowing that for everything there is a perfect moment. I love the abundancy of nature in a country like Costa Rica, I love the Pacific, I love the sweaty atmosphere… alle so different than the country I live in, Belgium. It has been a though acceptance to live here, and often I wander if it isn’t the moment to go back to Latin America, which still is the continent of my soul and where my children were born. But I know that if it has to be, there will be a right moment. When I met Sofiah in Danyasa yoga in Costa Rica, I felt a strong female warrior energy, flexibility and creativity… and I felt I could and would like to learn in this place. We need in Belgium a flowing, opening, flexible and creative energy.

My life motto? Step out of the gray zone of middleness and fear and your live! Live life as a fascinating, playful and far-reaching journey’ …. and… Discover and Awaken the Goddess in each one of You!!!!